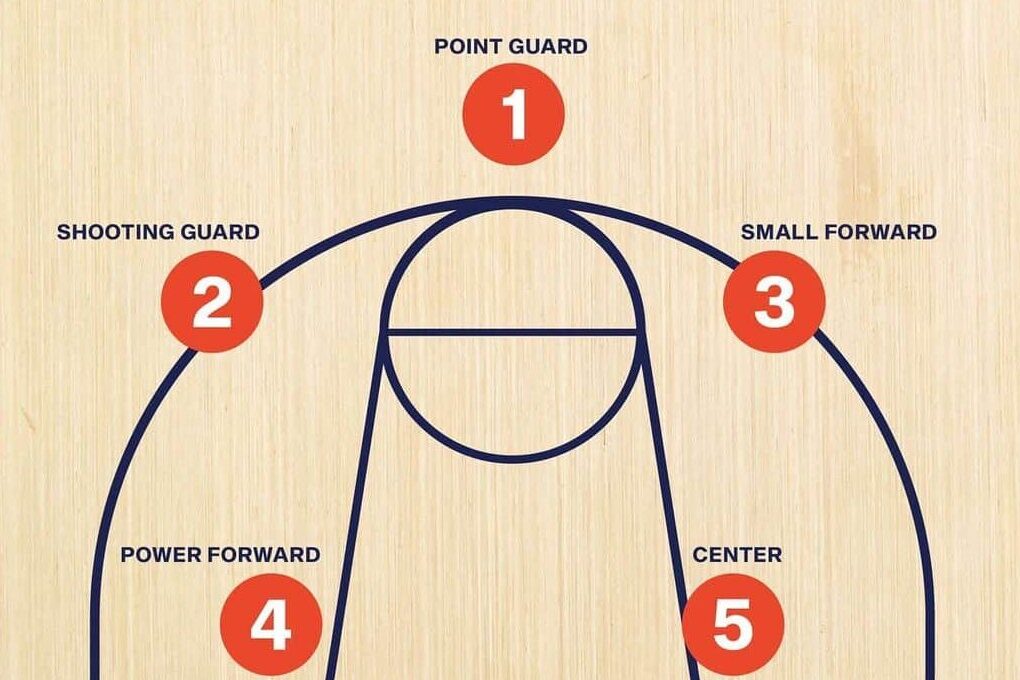 Basketball is an exciting sport filled with dunking, ball steals, “breaking ankles”, and more. As exciting it is to watch, it’s even more exciting to play. Every NBA player from Micheal Jordan to Steph Curry to Lebron James started with a want and interest to play the game.

Knowing what each position does in basketball will help you figure out what positions you will be interested in playing and what will work best for you based on your capabilities.

Every position has a specific role, but that doesn’t mean as a player you can only do what is in your position’s description.

Basketball over the years has blurred the lines between traditional roles and often you will see players doing things on the court that would traditionally be for another position.

Point guards are traditionally the best ball handlers and are leaders running the offense, which is still true today. Being able to control the ball and the pace of the game is an important part of being the point guard.

Point guards have to be effective at communicating on the court. They are the ones who keep the team focused on the game and the play happening. It’s important that a point guard knows and can also envision what the coach would want the current play to happen.

Point guards can not be shy or quiet. If you are extroverted or at least not afraid to take command and shout around the court, being a point guard may be an option for you.

Point guards are also referred to as playmakers. They handle the ball on the court and are continuously running around.

When they have the ball they control the pace of the game and are constantly analyzing the court to figure out who is in the best position to shoot. They’re usually shorter members of the team, but not always.

Traditionally, point guards don’t shoot as much as their other teammates, but as time has gone on this has become more of a gray area. Steph Curry is a point guard for the Golden State Warriors. Steph Curry is known for his shooting abilities, specifically three-pointers.

He has a 43.3% career 3-point percentage and leads the top 200 players in 3-pointers made. Curry combines the traditional role of a point guard with the ability to be dependable with taking and making the shot if necessary.

By the name, it’s pretty easy to conclude that shooting guards have the main purpose of shooting the ball. They are typically the best shooters on the team. The shooting guard may not be as great at handling the ball as the point guard, but they still need to be able to handle it well.

They play under constant pressure due to shooting, especially at crucial times in the game when the shot clock is running out. Shooting guards should have the ability to assist point guards as well as step up to roles of that position if needed on the court.

If shooting isn’t your strongest ability, the position of shooting guard will not be in your best interest. Some shooting guards include Kobe Bryant, Michael Jordan, James Harden, and Luka Dončić.

Being tall with a greater wingspan is an advantage for defense purposes. If you have a dominating presence and the height to go with it, it’s possible you will like the center position. Blocking, alley-oop passes, and dunking are in a center’s forte. Nikola Jokić, Karl Anthony Towns, and Rudy Gobert are all centers.

Nikola Jokić is an offensive center that has elevated the center position. As said before, traditional roles have become slightly obtuse as the lines blur between positions.

Ultimately, Jokic is a center, but he is able to transition into plays as a guard. He is able to steal, assist, and shoot the ball.

They are also the most versatile position because they have the ability to switch over to shooting guards and power forwards. Two notable examples of a small forward are Lebron James and Kawhi Leonard.

They have the ability to consistently switch from the traditional role of small forward to shooting and being a powerful defender. Small forward will be the position for you if you feel you have both the ability to be a strong defender and make a shot when necessary.

In this 2019 highlight video of the best play from small forwards, the versatility of the position can be seen. Playing defensively and offensively from rebounds to confidently going for the shot. These players are roaming around the court in every corner and pocket.

Power forwards play similar to centers near the basket, looking for rebounds, and defending taller players. They also have the role of taking long shots. Power forwards are athletic having size, strength, and skill on their side.

If you are skilled with taking long shots and like the defensive part of basketball you will want to look into the power forward position.

Going deeper into Stretch Fours, this is a power forward that goes beyond just what it means to be a tall and large player. They are not only using their muscles but also their shooting abilities to take longer shots.

Not every power forward has to be a stretch four, but if you have the ability to have the dominance of a power forward while also being able to make a long shot and open the floor up, this position will be of interest to you.

What Position is Right for You?

Knowing what position is right for you comes with knowing the roles of each position, pinpointing your role models if you have them, playing the positions out, and finding your strengths. You can always work toward a position as well.

How can you play like them? The most obvious way is by playing the same position as them because it gives you a chance to figuratively be in their shoes. It’s a great place to start if you haven’t jumped into playing basketball at all yet and are in the beginning stages.

Figuring Out Your Skills

The most important part when trying to navigate through which position you should play is figuring out your skills. Your position should clearly highlight your strengths and what advantages you have on the court physically. Let’s break down some basketball skills that will help you figure out a position that could be right for you.

Height will always be a factor in basketball, because the taller you are the closer you are to the net and being able to block passes and shots. If you are on the shorter side being a shooting guard or point guard will most likely be best for you. Center usually goes to the tallest on the team so height is a requirement for that position.

Although every player needs to know how to dribble, dribbling plays a major role for point guards and shooting guards.Guards will have the ball the most when in offense so they have to be good at dribbling as the ball can not be at rest.

Being able to dribble good means you know how to control the ball, which is important, especially in order to not get the ball stolen from you or lose it when you make abrupt movements, such as juking and faking opposing players.

How consistent are you when it comes to making the shot and do you have the confidence to shoot the ball? Shooting requires technique and confidence. If you aren’t confident in your ability to shoot you will most likely not even try to take a shot, especially under pressure.

If you’re looking to be a shooting guard you would need to have that confidence to shoot the ball because that is the main purpose of your position. Your shooting technique is important in all positions because at the end of the day anyone can take a shot, but it is more important to have great technique in some positions over others.

Focusing on the target, having a good stance, balance of the body and hand, delivery, and follow-through are all a part of shooting.

If you are confident in your abilities and consistently make the shot any position that relies on you being able to take the shot is a position you will like to look into. Remember, you can always practice and improve your shooting skills.

Rebounding is a role for both the power forward and center and can switch over to the small forward when they are blurring the lines of positions. Rebounding skills consist of hand prep, blocking out, and catching the ball.

Rebounding doesn’t require perfect technique you just have to have speed and dominance when it comes to gaining possession of the ball. Rebounding can be both an offensive and defensive requirement.

Being able to analyze the court in order to make the right decision for the play is an important skill to have if you are a point guard.

If you are not able to effectively analyze the pros and cons of the options you have in a short period of time, you can ultimately cost your team points and the game.

It’s about not only knowing your team but having a sense of being able to predict the other team’s actions. In the position of the point guard, you can’t just do, you also have to think.

If you are more of an impulsive player, analyzing the court may not be a skill set you have therefore you may want to stray from being a point guard.

Leadership can show up in many forms and can translate between positions, but it will ultimately be a skill needed for the point guard position. You have to be able to communicate effectively on the court with your teammates.

You need to be loud and clear when calling out plays that either you think are the best for the moment or the coach has told you to do. Confidence is a part of being a leader.

Knowing the role of each position, keeping in mind the players you gravitate towards, and assessing your current skills are all great starters for figuring out what position you should play.

If you do not practice playing in all of the positions you have interest in though, you will not fully know which best fits your skillset all around. On paper, the position you play may be shooting guard, but when you practice more positions you may find out you are a better small forward.

It’s also important to note that you may be more skilled in one position, but you may like playing another position better.

If you don’t like the position you’re playing in, it could cause you to not like playing the game of basketball at all. Every basketball skill can be worked on in order to improve.

Every position has evolved into more than its traditional role, so to find what’s right for you you have to assess what you would like to do, what you can do, and what you’re willing to improve on.