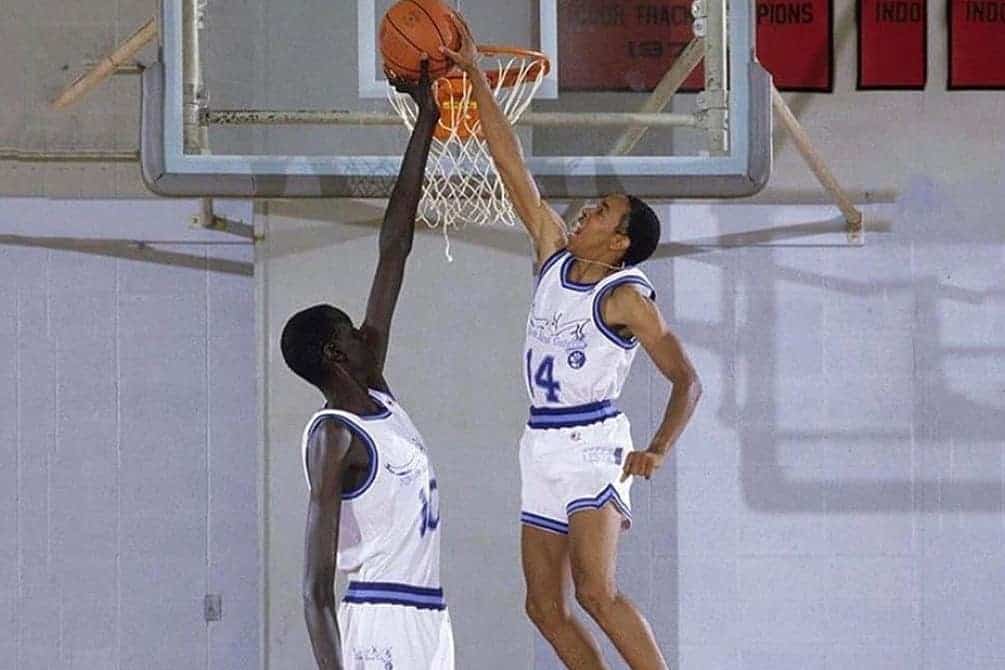 Compared to the average person, NBA players are by definition some of the tallest athletes on the planet. While all sports have their physical requirements, in the NBA, height is one of the key physical requirements for players in any position. Height not only gives basketball players advantage in terms of shooting but also helps defensive players keep the ball out of the hoop.

Height is one of the things that are not teachable which is probably why people over 7 feet tall have a 17% higher chance than the average person of making it to the NBA. However, height is not everything and players like Steph Curry at 6′ 3 have shown that you do not have to be the tallest to be the best. Some NBA positions like point guards are not inhibited by height which is why players like Steve Nash and Steph Curry have managed to amass impressive accolades despite being shorter than the average NBA player.

While all NBA players are tall, the average heights for different positions vary. The shortest players are usually the point guards while the tallest players are typically the centers and the forwards. In most cases, point guards need more skill and talent as opposed to height. This is why players for this position are picked for their agility and skill and not just based on height.

The average point guard height ranges between 5’11” and 6’3”. Currently, the tallest point guard in the NBA is Ben Simmons who stands at 6’11”. Historically point guards have been the shortest players in the NBA starting at an average height of 6’ in the 50’s to the current 5’11” to 6’3”. The shortest NBA player of all time Muggsy Bogues who was 5’3” was a point guard and had a 14-year career in the NBA.

For point guards, control over the ball, ability to dribble, agility, and court awareness are much more essential than height. Of course, it helps if the player has both skill and height. Some of the best point guards in the NBA right now include:

The average height of a power forward in the NBA is 6’8” To 6’10” and this makes them one of the taller positions on the court. Power forwards play multiple roles where height is a definite advantage including defending, rebounds, playing in the post, and setting up screens. As the game of basketball continues to change power forwards now shoot three points and mid-range jump shots so this position plays several roles.

In terms of height, power forwards are second only to the centers. Some of the best forwards in the game currently include:

Over the past 20 years, the average NBA height has evolved. Here are the stats for the average heights by position over the last two decades.

In the 50s the average NBA height was 6’5″. Compared to the average male height 5’8″, NBA players were still a lot taller compared to athletes in other sports. The decade produced some basketball legends including Bob Pettit 6′ 9″ , Neil Johnston 6′ 8″, and Paul Arizin 6′ 4″ .

In the 1960s the average NBA height was 6’5″ which was similar to the average height from the previous decade. Some of the stars of the 60’s included Wilt Chamberlain who was an impressive 7′ 1″ and is still regarded as one of the greatest NBA players of all time. Other greats from the era were Oscar Robertson  6’5″, Jerry West 6’3″ and Bill Russell 6’10″.

In the 70s the average NBA Average height rose marginally to 6’6″. Some of the most notable stars of this decade included Kareem Abdul-Jabbar 7′ 2″, Julius Erving 6’7″, Elvin Hayes 6’9″ and John Havlicek 6’5″.

In the 2010 decade the average NBA height was 6’7″. Among the most notable starts of this period include LeBron James who towers at an imposing 6′ 9″, Kevin Durant who is a tad taller at 6′ 10″. Other stars of the decade include Stephen Curry 6′ 3″, Kawhi Leonard 6′ 7″ and Klay Thompson 6′ 6″ who continue to make the mark in the NBA.

When it comes to basketball, height will always be an advantage but it is not the only asset that players need to have. Depending on the position you play, the average height requirement will vary. However, in most cases no matter how tall you are skill, dedication and passion for the game are necessities for you to play and play well. As the game continues to evolve with time, the average heights in the NBA for different positions are also likely to keep on changing. However, given the nature of the game we can safely assume that the average height for an NBA player will remain in the 6’5″ to 6’7″ range.

Tallest Point Guards in the NBA