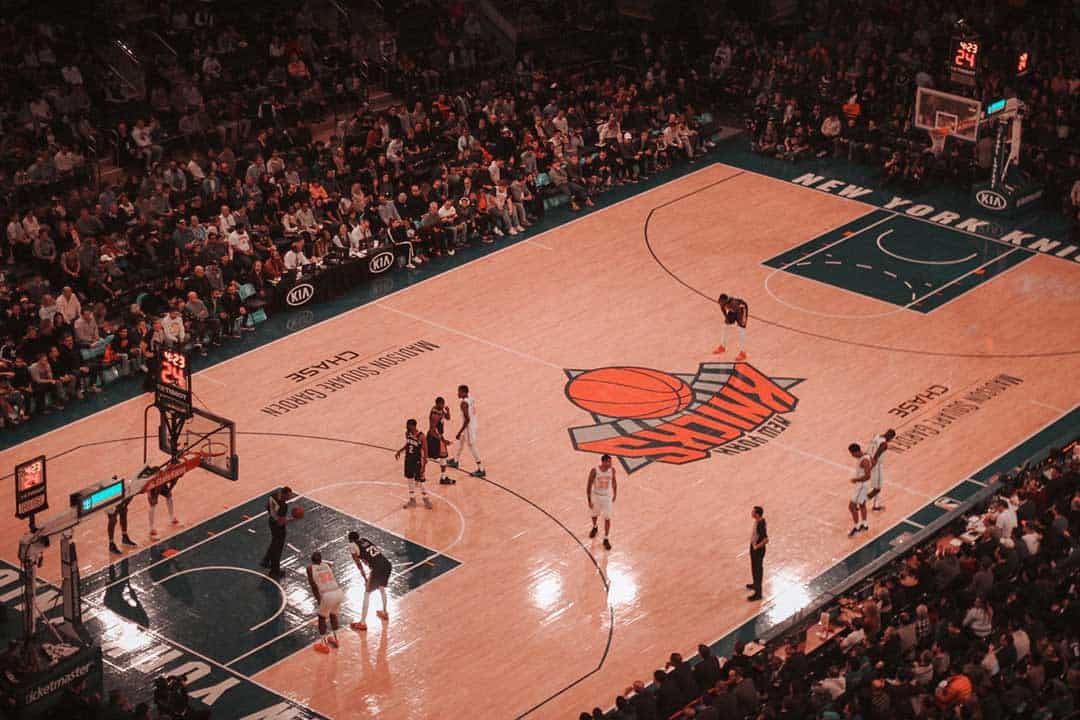 Basketball has a language of its own, just like any other sport. If you aren’t already a basketball player or fan of the sport, it can be confusing to know what commentators, coaches, players, or fans are talking about when they say things such as the paint, And-1, screen, etc. These terms have come into play over the years in an evolutionary process. These terms aren’t just made by NBA officials, they are terms that have come from coaches, commentators, and more that stuck into the vernacular of basketball. The paint is no different than any other terms, it went through an evolutionary process as well. It’s an important part of the court, a territory to be controlled.

What is the Paint in Basketball? 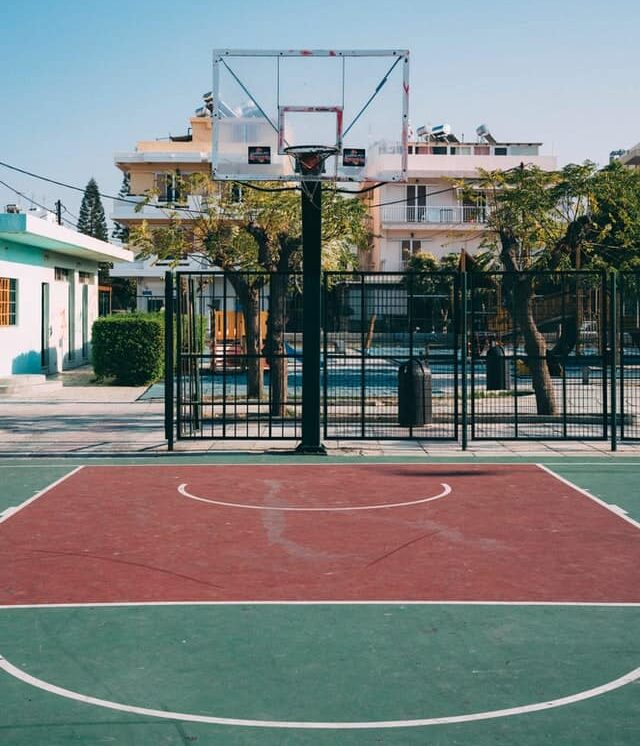 In basketball, the paint is the rectangular-shaped area on the court underneath the basket inside the lane lines that extends from the baseline to the free-throw line. Usually, the paint is a different color than the rest of the hardwood court hence the name “the paint”. Often, the paint’s color will correlate with the team it is home to. Outside courts such as one’s for parks and recreation centers may not have a fully painted rectangular area, but none the less it is still marked on the court and may be called the paint by players.

History and Dimensions of the Paint

The NBA changed the dimensions of the paint twice in the past. George Mikan, standing at 6’10 was one of the first “giants” of the NBA that changed the way the game was played. In an attempt to limit Mikan’s clear dominance on the court, when the league was not yet filled with extremely tall players, the paint was widened from 6 feet to 12 feet. The lane was widened again in 1964 in order to limit the dominance of Wilt Chamberlain who stood at a whopping 7’1”. Overall, changes to the paint in the NBA were all attempts to create a balance between giant players and those shorter.

FIBA had a trapezoidal painted area until 2010. The way it worked is that the paint widened as it approached the baseline. Now the paint is the same rectangular area as the NBA.

Areas of the Paint

The paint is an important part of the court due to its location. The paint has two other names, the lane and the key. The reason it is sometimes referred to as the lane is because the free-throw line and lines extending from the free-throw line to baseline create a long area that resembles a lane or runway. When taking free-throw shots, players are to stand outside of this area. This area is also referred to as the key because in the early days of basketball it created a keyhole shape due to the narrower lane before the NBA extended it.

The area on the lane lines and near the basket is the low post. Players will establish a position or post up in this area so they can receive a pass and try to score points or make another pass to a teammate.

The high post is higher up than the low post, more towards the free-throw line, and is used in the exact same way as the low post.

The area near the basket on the free-throw lane lines is the block. The block shape is marked on the court. It is used as a marker to keep a player at a distance from the basket when attempting a free throw. During gameplay, it is a part of the low post area where a player is in a position to post up.

Top of the Key

The top of the key is the area around the jump ball circle and above the paint at the free-throw line. Plays will often start or be directed by point guards in this area of the court.

Why is the Paint Important? 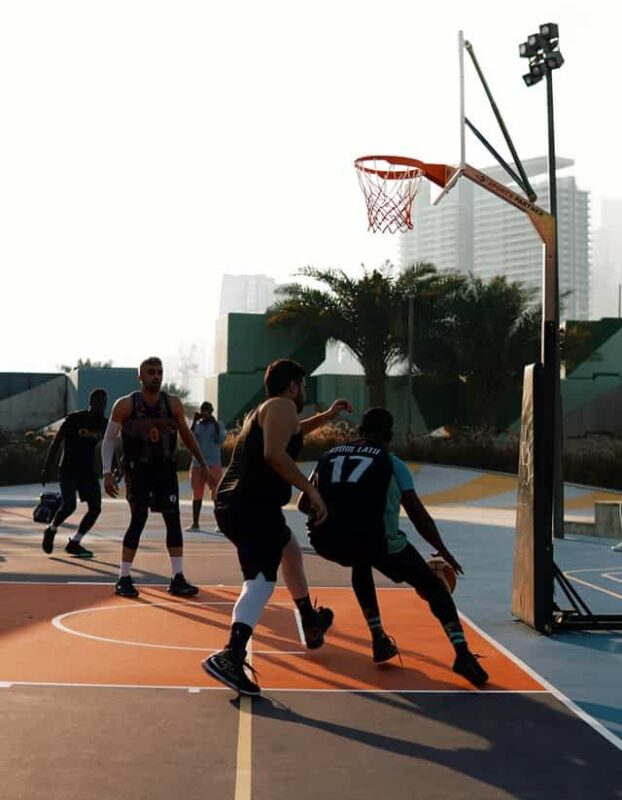 The paint is vital real estate in basketball. Game plans are centered around it, there are basketball rules that determine what can happen in it, and players dedicate the time to master moves to be played in it. The proximity of the paint to the basket makes it so important because it is one of the best spots to shoot from on the court. You are more likely to score points in this area when you take shots in and around the paint, The field goal percentage is highest here due to layups and dunks being made in the paint, which makes owning the paint an important goal and advantage.

The advantage of owning the paint offensively is the reason it is so important defensively to protect the paint. The team currently on defense can keep the opposing team from getting into the paint and taking shots, lowering the opposing team’s field goal percentage.

Strategies Used in the Paint

The paint has many plays and strategies developed with it in mind, as it is such a vital part of basketball. Some techniques used to try to take advantage of the key to get high percentage shots are posting up, stretching the floor, pick and roll, and penetrating the lane.

This area can create great action for players, but can also become quite physical as everyone is seeking control and defense over the paint. The paint, depending on the referee, gets a little less restriction on low-level pushing and shoving, making it an area of the court that is usually taken over by power forwards and centers (usually the tallest and biggest players) on the team. Think of players such as Shaquille O’Neal, Nikola Jokic, Lebron James, Larry Bird. Both rebounding and shot-blocking happen in the paint, primary roles for power fowards and centers, another reason it is overwhelmingly dominated by them. These two aspects are a part of controlling the paint, making it a critical part of a team’s success in the game.

This is the most defensive area in the game due to the high field goal percentage. Protecting the paint from offensive players is important when playing on defense. Strategies used to secure the paint include weak-side help, zone defenses, and more.

Restrictions of the Paint

The evolution of basketball, primarily the increase of height, size, and athleticism of the players, resulted in restrictions in the paint. Before restrictions were made, centers and forwards could easily wait under the basket for long periods of time and have a guard pass them the ball or simply wait for rebounds. Due to this, the 3-second rule was coined. The 3-second rule simply means an offensive player can not stay in their free-throw lane area for more than 3 seconds when their team is in possession of the ball in the frontcourt. If the 3-second rule is violated it results in a turnover. The defensive 3-second rule has come to light recently by the NBA. This rule is also referred to as illegal defense and states that a defensive player can’t be in the free-throw lane if they are not actively guarding an opponent for more than 3 seconds. If this rule is violated it results in a technical foul. The offensive team gets a free throw shot and retains possession of the ball.

Players that Dominate the Paint

Reading about the paint and having a general understanding of it is one thing, but it’s important to see it being dominated in action to get the full scope. Most recently, Giannis Antetokounmpo and Zion Williamson are players who have dominated points in the paint.

Zion Williamson Is Having A Dominant Sophomore NBA Season

Giannis holds an average of 17.5 points in the paint, which made him for two consecutive seasons the player with the most paint points per game in 2018-19 and 2019-20.

The paint is primary court real estate that every team wants control of both offensively and defensively. Sitting underneath the basket, it is the easiest area to get points and is dominated by centers and power forwards. Having knowledge of a team’s play structure in the paint will allow you as a player, coach, or fan to understand their style and physical play.